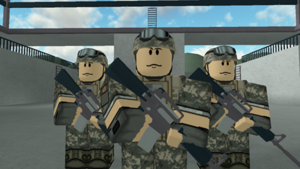 This doesn't match the theme of ROBLOX.

Military roleplay is a type of roleplay on ROBLOX that is about roleplaying and being in the military. The theme is very terrible and here's why.

"Not dark depressing military things" You know Roblox is multi-platform since back then they have Military category in genre.

16 days ago
Score 0 You
HE CAN DISSAGREE ITS HIS OPINION
Permalink
Retrieved from "https://garbagerobloxgames.miraheze.org/w/index.php?title=Military&oldid=1161"
Category:
Cookies help us deliver our services. By using our services, you agree to our use of cookies.