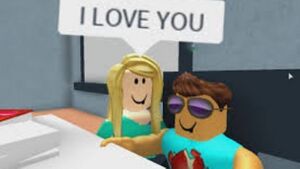 Here's an example of online dating in a nutshell.

"Online Dating", commonly referred to as "ODing", is a term which describes the practice of dating on the internet.

On Roblox, this practice is heavily disliked by old Roblox players and many players in general, because Roblox's rules clearly state the Online Dating is prohibited on Roblox. It has started around 2008 (when the Town and City game Robloxaville by Playrobot was released), and is still going on to this day.

Sadly, Oder has devolved as a cheap insult used by users to harass and bully users who dress a certain way. it basically means the same thing as noob

NOTE: Alot of them are little kids, or maybe new players, who don't know that Online Dating is prohibited there. This article will only talk about the players which refuse to stop, despite they were already warned.

The hatebase, also known as Anti-ODers,are known to be extremely harsh. Just in case, the main problem of Anti-ODers, and ODers has its flaws. However, they are usually less harsh and toxic than the ODers.

What You Can Do If You See ODers

9 months ago
Score 0
I a, against it And yes I play roblox but don’t really play the more popular games
Permalink
You are ignoring the author of this comment
Show comment | Manage ignore list

7 months ago
Score 1 You
Most R-Thots Seem to handle criticism poorly. One Hypocritically attacked Ruben Sim, and his GF, calling them b*tches that werent taught respect. Another Threatened Legal Action, not knowing how it works.
Permalink
You are ignoring the author of this comment
Show comment | Manage ignore list

7 months ago
Score 0
This is why I play Roblox games that are not based on Online dating.
Permalink
You are ignoring the author of this comment
Show comment | Manage ignore list

25 days ago
Score 0 You
Really I did
Permalink
Retrieved from "https://garbagerobloxgames.miraheze.org/w/index.php?title=Online_Dating_in_Roblox&oldid=1204"
Categories:
Cookies help us deliver our services. By using our services, you agree to our use of cookies.