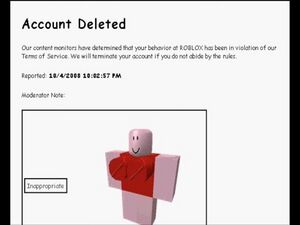 This proves that the early years of Roblox wasn't perfect.

Richard Lujungberg (b. 1993), known as Fleskhjerta, was a famous user during the early years of Roblox and was mostly known for being one of the most famous Roblox-related YouTube users with popular videos such as the ROBLOX Bloopers series, Fleskhjerta then continued his Roblox career. However, it lasted a short time when he got terminated on October 4, 2008.

When Fleskhjerta joined Roblox on February 24, 2007, he made two models, it shows a noob with cylinders, meant to be breasts. They were used for his ROBLOX Bloopers series. His last game update was in August 10, 2008. Also, his last Roblox Bloopers episode was in May 28, 2008

In October 4, 2008, A user reported on the two models Fleskhjerta made, causing him to get terminated, and his ROBLOX Bloopers series to get cancelled as well. There were rumors saying that the player who reported on the models was Heroton2008. He uploaded a video about the incident 13 days later.

"also, don't bother sending me a PM about fleskhjerta, it was over 3 years ago, get over it, and if you have something to say to me, say it to my face, otherwise I do not care."

Fleskjerta giving additional information on why he was terminated

After he was terminated, he went back to making non-Roblox related YouTube videos, such as Super Mario 64 related videos. There were also Fleskhjerta impersonators, especially if they are from 2009.

A year later, Fleskhjerta made an April Fools prank that was meant to be Roblox Bloopers 6, but turned out to be the music video for Never Gonna Give You Up which had bad singing from himself, then switches to a still screenshot, playing 1920s jazz music.

The following year, a Roblox YouTuber named Jgoosse made a fan made series called Fleskhjerta Rebirth until it ended in 2016.

On April Fools 2014, Fleskhjerta created another April Fools prank which was called Roblox Bloopers 7, but turned out to be Super Mario 64 bloopers. Then switches to an old still screenshot of Fleskhjerta with piano music.

Three years later, Fleskhjerta did an April Fools prank again, which was called "Roblox Bloopers Returns!" It starts with his SM64 character on a lake, with screenshots of comments from fans telling if he could go back to Roblox. Then switches to an old still screenshot of Fleskhjerta in his studio.

Finally, on November 14, 2019, Fleskhjerta created a new account called Flaskherder after 11 years, which he used to livestream himself playing Roblox games the following day. During the livestream, Fleskhjerta played CloneTrooper1019's Super Nostalgia Zone, Lumsden84's Survive The Evil Sponge Killer In Area Fifty None, ROLVe's Arsenal, and stickmasterluke's Natural Disaster Survival. Heroton2008 was terminated sometime between 2019 and 2020 for unknown reasons.

6 months ago
Score 2 You
Roblox banned someone who just put cylinders that aren't even socksulized, yet they ignore people who socksulize the entire avatar.
Permalink
You are ignoring the author of this comment
Show comment | Manage ignore list

6 months ago
Score 1
Yep and ROBLOX is hypocritical
Permalink
Retrieved from "https://garbagerobloxgames.miraheze.org/w/index.php?title=Termination_of_Fleskhjerta&oldid=574"
Categories:
Cookies help us deliver our services. By using our services, you agree to our use of cookies.