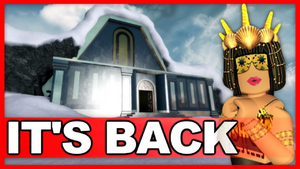 The church of unnormal people...

NOTE: FizCap or known as needhelp actually commented on the FANDOM page! Kudos to him!

The Sister’s Covenant was a "religious" group on Roblox that was meant to fight against sexism and homophobia. It was criticized for being too surreal, if not pretty scary and hypocritical. It was owned by the now-terminated Alovia and had 1,973 members until its deletion in August 10, 2018. It was so surreal that it was said that it got hunted down by some myth groups.

After the deletion, a new group, called The Sister's Order arose with the same agenda as its predecessor, except having a "hospice care." It was created by Alovia, who goes under the username "Valindra". Valindra is a pass-guessed account and not Alovia's real alt.

Why They Were Garbage

5 months ago
Score 0 You
pretty bad ppl ngl, played their game, staff kinda nice but they are hiding something
Permalink
You are ignoring the author of this comment
Show comment | Manage ignore list

2 months ago
Score 0
The Game Itself: PEACEFUL BY SMALL AND ZYLENOX
Permalink
Retrieved from "https://garbagerobloxgames.miraheze.org/w/index.php?title=The_Sister%27s_Covenant&oldid=714"
Categories:
Cookies help us deliver our services. By using our services, you agree to our use of cookies.